ROBERT GRILLO
Sign up with your email address to be the first to know about new products, VIP offers, blog features & more.

Farm to Fable is a book and presentation series that explores the fictions of our animal-consuming culture, juxtaposed against the truth about farming, the animals we exploit for food, our core values and a more just world for all of us who inhabit this planet. The following are some frequently-asked questions about the project. These may be useful conversation starters for media or anyone who is looking to dabble a bit more into the subject!

What is Farm to Fable about, in a nutshell?

Farm to Fable is our culture’s pervasive false narrative that other animals are here to serve us, that they are willing participants in whatever we want to do with them, that we are the “God” over their fate. And Farm to Fable is about debunking these fictions and speaking truth to power about the facts of the animals we exploit.

What inspired you to write the book and what do you hope to achieve with it?

Farm to Fable is the culmination of years of exploring the fictions of animal consumption from the perspective of a branding and marketing person who has worked on the inside to see how these fictions are created and how they function once they’re out there for the public to digest. I realized early on that even vegans were, to varying degrees, under the spell of these fictions and some animal groups even use them in their campaigns. So I felt compelled to write the book in the hopes that it would bring a much needed awareness to a sorely-overlooked issue.

For the general public, my hope is that the book will prompt them to question what appears to be “normal” in their everyday lives, to look more critically at what they see in the grocery stores and restaurants, what they see on TV and online. I hope that they might better see how we are being manipulated to make food choices that ultimately betray their core values of kindness, reciprocity and decency.

What is the big takeaway from the book?

Beliefs matter and they matter enormously! They are the reason why corporations spend billions of dollars on appealing to our beliefs about consuming animal products. It is a spectacularly successful strategy. The evidence is all around us. As journalist Naomi Klein says, “Core American brands became powerful precisely because they understood that they were selling ideas, not products.” So, we must first recognize the power of beliefs that trigger our behavior. And then, if we want meaningful change, we must find constructive ways to challenge societies’ beliefs. Activism that focuses solely on behavior change will never be enough.

Why should people even care about this issue?

Because, first and foremost, the truth matters. Or do we just want to be lied to?

Fortunately, several recent studies show an overwhelming majority of people who claim to care about animal suffering and reducing it. That doesn’t mean they’ve acted on it yet though. But more generally speaking, If we care about justice and fairness and empathy, then just being born another species is not a morally relevant criteria for harming someone and it certainly is not a justification to violate someone as a cheap, disposable resource, no more than being born gay or female or with a different skin color.

What are some of the more common fictions?

Our culture inundates us with a wide range of fictional messages and they follow us everywhere we go, either physically in the grocery store or in our homes via TV or internet or phone. They communicate to us that eating animals makes us more masculine (when we eat meat), more feminine (when we consume the female proteins primarily marketed to women, dairy and eggs), more ethical if we decide to pay a premium for “humane” violence and exploitation, more natural if we believe in false notions of domesticated breeds being anything close to what exists in the natural world, more in line with evolution if we believe in the junk science that evolution has a proverbial gun to our heads to consume animals lest we perish as the dominant species on the planet, more honorable if we actually believe that animals sacrificed their lives for us so we could stick a fork into their flesh. And this is just the tip of the iceberg! My book and presentations collectively cover hundreds of others.

What is the audience for Farm to Fable?

The animal-consuming public which is under this spell of food industry propaganda and fake news, as well as the animal activist community who seeks to learn how a better understanding of these fictions can empower our activism. In both cases, the goal is to expose the lies and bring forth he truth which is the first major step in disempowering the suffering-for-profit, exploitation industries.

What has been the reaction to Farm to Fable?

Farm to Fable is based on the premise that most people are natural truthseekers. They suspect that there is a massive effort to deceive the public by the food industry, but they don’t have the tools or skills to identify and challenge it. That’s where I think Farm to Fable has been most useful for people from whom I have received feedback. It sounds cliché to say the truth shall set you free, yet rising above the noise and seeing things for what they are, is very liberating for people. My hope is that this project is a window into that truth.

For others, the book will trigger cognitive dissonance and a search for further justifications, often stumbling upon those already addressed in the book. The most antagonistic responses to my work are usually those who have some connection to the exploitation industries.  And this calls to mind the famous quote from Upton Sinclair, “It is difficult to get a man to understand something, when his salary depends on his not understanding it.”

What drives our animal consumption?

The animal exploitation industries — namely the meat, dairy and egg industries — which have the most at stake and the most to gain from perpetuating these powerful cultural fictions. These industries are the only beneficiaries really. They profit at the expense of everyone who is caught up in the path of their destruction: the animals they exploit, the wildlife they exterminate to protect their domestic animals, the toll on the environment and climate change, the cost to human health, the worsening of food scarcity and global poverty and its contribution to the overall social instability that results from a greater disparity between haves and have nots.

With all the good reasons to be vegan, we should actually be asking the inverse question: Why not vegan? The idea that we should avoid inflicting harm and suffering on others, especially in cases where we can easily avoid it, is already widely accepted by all but perhaps sadists who actually get pleasure from seeing others suffer. If we see a dog being beaten on a public street, we would certainly object and perhaps even try to stop the act, but when animals who suffer by the billions for palate pleasure are made to suffer in silence and invisibly, we suddenly pretend this is acceptable? It just makes no sense. In short, veganism is not a position that requires a defense since we already believe in the principle of harm reduction. Acting on what we believe is what veganism is all about.

For me, such a question is comparable to asking if the world will ever completely give up prejudice, because what we’re discussing here in Farm to Fable is all based on a prejudice against a handful of species we just so happen to want to exploit for profit and pleasure. I don’t know of any other social movement that has achieved 100% compliance from the entire global population, but then it only takes a small vocal minority to foster mammoth changes in society and levels of adherence are like a domino effect, especially with the rapid pace of our information age.

What about the hundreds of reasons why people claim they are justified in consuming animals?

People want to talk about anything but the big elephant in the room which is why would we want to inflict suffering on others when we could easily choose not to? They will throw out a bizarre array of deflections and distractions that do nothing to address that core question because they want to avoid it. As an activist, my job is to refocus the conversation back on the elephant in the room and urge people to think and act on this.

But aren’t there some valid reasons for animal use to benefit ourselves?

Well, this is where we need to focus on the big picture, rather than some exceptional case. Consider the fact that 99% of the animals we exploit are for food. We have a wide range of reasons why it is impossible for animals to have lives that matter to them more than our taste buds matter to us, why it is impossible for us not to exploit them or pay someone else to exploit them to satisfy our taste sensations, and why it is impossible for society to change from accepting the current abhorrent treatment and use of animals to rejecting this. We claim that unless farmed animals can be perfect and saint-like in their actions, they deserve to be killed and eaten. Or, we say, when animals can talk, reason, solve mathematical problems, build skyscrapers, send a man to the moon, paint a Rembrandt, or do whatever it is that we think makes humans so exceptional and unique, we’ll continue to pay someone to kill animals so we can eat them. That’s the meathead logic we use for causing such immense suffering to farmed animals. This is not the logic of a society that claims to care about justice and dignity.

Farmers say they know their animals best. What do you say?

Yes and farmers continually claim that the rest of us should visit a farm to educate ourselves about animals. But my response to farmers is that they could stand to learn a lot more about animals from sanctuaries. Here’s why.

First, visiting animals on farms does not produce any “breakthrough” in our understanding of animals because the objective of farms is not to provide an environment in which animals are free to express themselves or an environment where animals can be studied and better understood. Farmers are not experts in animal behavior, and they are not even necessarily good observers of animals. Under the very best circumstances, farms provide an understanding of how animals subsist under completely manmade, controlled conditions, as if their fate as commodities is a foregone conclusion.

In contrast, sanctuaries challenge visitors with a new paradigm for understanding animals. They present their rescued residents as they are and ask us to observe and interact with them as unique individuals, rather than by the norms, assumptions, and prejudices imposed upon their species by thousands of years of exploitation. For sanctuaries, animals are in fact an end in themselves, rather than a means to an end. 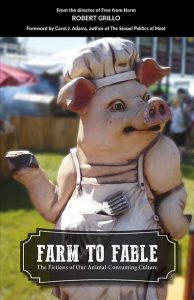 My book, Farm to Fable: The Fictions of Our Animal-Consuming Culture, is about our culture’s pervasive false narrative that other animals are here to serve us, that they are willing participants in whatever we want to do with them, that we are the “God”over their fate. Available on Amazon.